Home » Who We Are » Texas Counts Pooled Fund

The Texas Counts Pooled Fund (TCPF) operated as the strategic partner and funding arm of Texas Counts. Led by the Communities Foundation of Texas, TCPF mobilized funders to invest in a statewide pooled fund so dedicated funding could be equitably distributed across the state to support Census outreach. TCPF also provided additional support to grantees and Census champions in coordination with the Texas Counts Campaign.

15 philanthropic organizations contributed to the Texas Counts Pooled Fund, each serving as a member of the Grants Committee. See members of the grants committee by selecting “List of Funders” below.

The TCPF request for proposals (RFP) received 235 applications from across Texas. The Grants Committee played a critical role in vetting applicants and identifying organizations in areas lacking funding and resources which would highly benefit from TCPF investment.

Census champions and funders worked hand in hand to amplify one another’s work and fill gaps left by a lack of state-level leadership and funding. This included the Texas Counts Pooled Fund working closely with other Texas census funders to coordinate efforts, align funding support, focus resources on underfunded areas, avoid duplicating efforts, and foster collaboration among all grantee organizations. With the help of funders such as Hogg Foundation, Houston Endowment and The King Foundation, Texas Philanthropy raised over $5M in aligned funding for the Census support.

CFT worked with strategic funding partners to raise money for the TCPF. In total, 15 philanthropic organizations, including the WW Caruth Fund at CFT, contributed $1.9M to the TCPF. Thank you to the funders below, who supported the 2020 Census in Texas.

In addition to aligning with funding, the TCPF provided updates on Census response rates to their partners to keep everyone informed of their efforts, how the regions response rates were adding up across the state, and outreach initiatives that TCPF and TCC were engaging in. See Sample Status Report.

TCPF developed a Texas Census Landscape Analysis, a detailed breakdown of data from all Texas counties which helped steer funding and outreach.

The purpose of the Landscape Analysis was to equitably distribute funds across Texas and foster collaboration among grantees and funders. It was important to coordinate efforts from a funding standpoint to prevent duplicating efforts and jointly identify and fill any gaps in funding.

50 counties were identified as priorities for TCPF funding according to four attributes:

As the pandemic persisted, Texas Counts kept a close eye on Census self-response rates and when rates stagnated and grantees were in need of additional support to count their HTC communities, TCPF partnered with Shiftsmart, a virtual staffing company, and Allyn Media, a communications firm, to collect phone numbers of non-voters, train callers, and conduct a Census phone banking campaign. NALEO and the Texas Demographic Center also supported the campaign.

The TCPF co-designed and executed the 2020 Census phone banking program with Shiftsmart in target communities across the state, including Dallas, Brownsville, North Texas, and West Texas. Shiftsmart provided a team of approximately 350 agents to make nearly 1 million calls to residents in HTC communities, educate and inform households about the importance of the Census, and encourage Census self-response.

It is estimated that through 929,000 calls with informative and positive discussions about the Census, the campaign has an opportunity to yield $40 million in federal funding for the state. 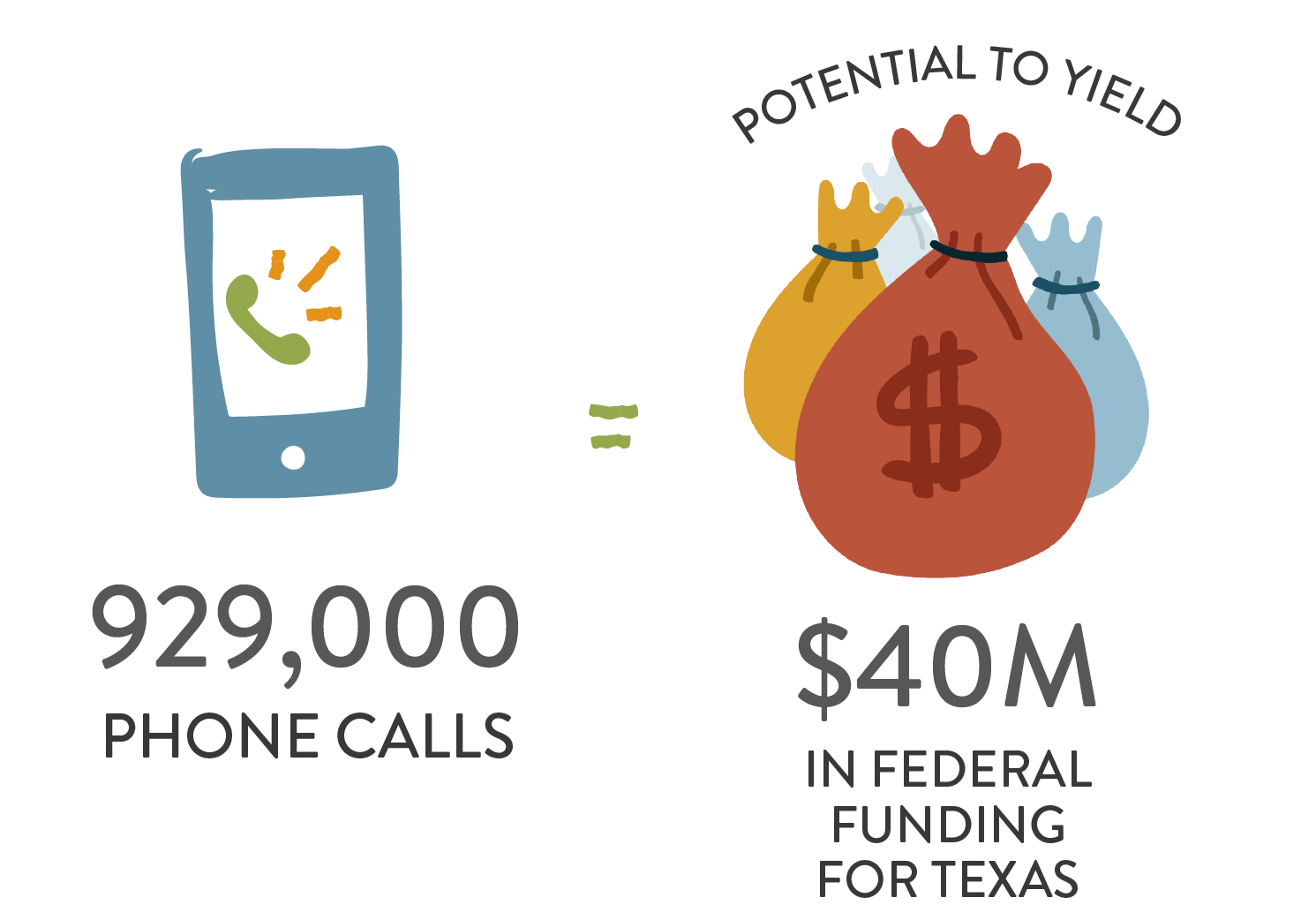